On 1st and 2nd October 2010, more than 60 business friends followed the invitation to the Technical Symposium "20 ILV of years". A heartfelt thank you to all of them because it was far away and cold as the venue was the ILV-Camp "Glück Auf" located in Seebad Trassenheide on the Baltic island of Usedom.
After the registration and welcome of the participants, the symposium began with lectures introduced by Martin Wagner. 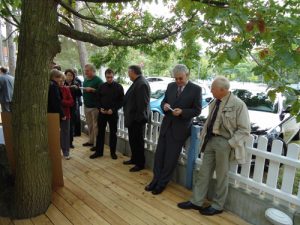 The first was Dr. Sigmund Jähn who spoke about "German contributions to manned space flight". Tagungsort Glueck aufUsing numerous pictures, he reported about the beginning of space flights on 3rd October 1942 68 years ago with the launch of the first rocket. The launch site of the A4 rocket is located near Peenemünde and can be reached with an approximately 30-minute walk from the venue. Dr. Jähn continued speaking about his experiences and missions in space involving the multispectral camera and the interpretation of the image material for resource exploration by the team of Prof. Karl-Heinz Marek who was also a participant of the symposium.

Tagungsort Glueck aufAfterwards, Gunter Grosch informed about "20 years of mining rehabilitation at Wismut" putting the achievements and visions of the miners, even after active mining well in the picture. Both Bad Schlema and the Federal Garden Show in Ronneburg are examples of a successful rehabilitation carried out by ILV with cm-precise geo-referenced aerial photos (far beyond Google Earth) on behalf of WISMUT.
The presentation of consultant Dr. Hartmut Puffe about "20 years of ILV - success factors" followed and pointed out that expertise was and is the guarantee of success but also factors such as team spirit, training, ideas and quality – especially in the daily work environment – are a substantial part of success.

Following, Dr. Monika Pilarski talked about "ILV - projects abroad, the creation of GIS Dubai/Sharjah". In this lecture, underpinned by a variety of images, the project objectives, the project implementation, but also personal experiences with the country and the people were presented very interesting. Amongst others, this project aimed the delivery of spatial databases for the Sharjah GIS Center and other agencies. In early 2006, the project started with the first of two digital photo flights over the area of Dubai and Sharjah City. In 2007, the second aerial survey was performed over the countryside, the oasis of Al-Dhaid and the urban areas Dibba Al Hisn, Khor Fakkan and Khor Kalba. After this presentation, she presented on behalf of all employees together with Andreas Forgber a voucher for a whitewater rafting trip to Martin Wagner. He spontaneously invited all ILV'ler to this boat trip through the wild water in Leipzig / Markkleeberg!
The presentation of Beatrix Wagner about "20 years of ILV – milestones" followed. Starting with the formation of ILV on 1st October 1990, over the buying the estate in Groitzsch/Wischstauden in 1993, the purchase of the first aircraft with camera technology in May 1995, the move of the company from Borna to Groitzsch in the years 1996 to 1998, the purchase of holiday camp Trassenheide in November 1999, the buy of a twin-engine aircraft in April 2000 (D-ILVW), the formation of ILV-Fernerkundung GmbH in 2001, the introduction of sea water surveys with survey boats and sonar equipment as well as the purchase of the first DMC in 2003 and its commercial use starting in 2004, to the purchase of a new aircraft in April 2006 (double-chamber variant) and the acquisition of second DMC 2008. With a little pride comments on the large number of projects inland and abroad (including France, Denmark, Romania, Bosnia-Herzegovina, Austria, Switzerland, Greece, Slovenia, Libya, Nigeria, Sierra Leone, Ethiopia, Kuwait, United Arab Emirates, Algeria ) as well as about the numerous appearances at industry meetings and trade shows worldwide were presented with pictures and with episodes.

It was followed by the lecture by Prof. Albrecht Grimm from IGI, a company with a high proportion of innovation in equipment and software development. His topic focused on "New developments in laser scanner and thermal camera technology". Also on the launch of the Quattro 3D DigiCam was discussed in detail - very interesting!
The next lecture by Gerhard Lauenroth (Z/I Intergraph) on "Further development of the digital aerial camera systems" presented the most advanced device technology which also finds its application at ILV. The launch of the new DMCII this fall marks another milestone in the digital aerial camera systems worldwide. 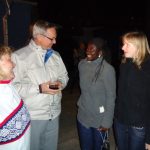 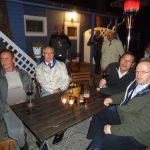 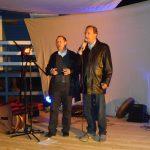 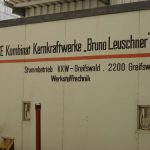 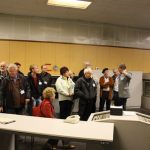 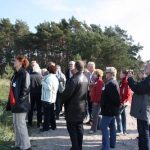 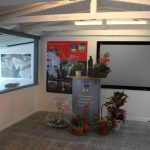